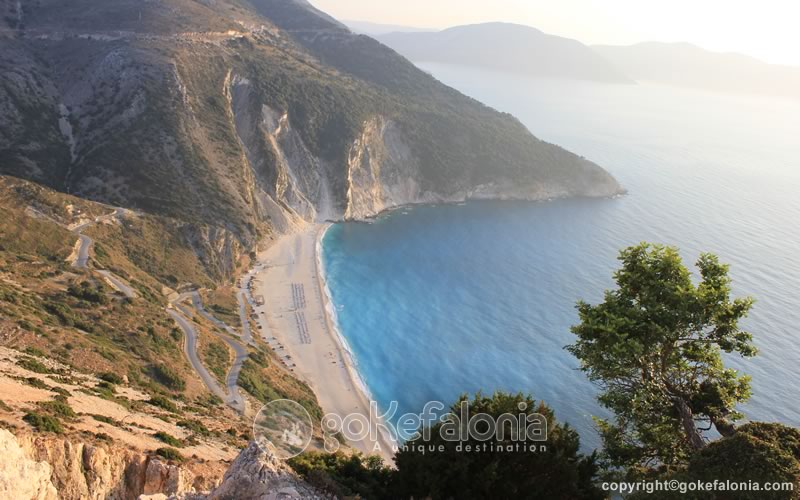 Myrtos beach is one of the most famous beaches, if not the most famous, and one of the most beautiful beaches of Kefalonia, as it constitutes a landmark for the island. It is not only known to people from Kefalonia but throughout Greece and all over the world, since it is ranked among the best beaches not only in Greece but also internationally. It is located in the northern part of Kefalonia, in the area of Pylaros, at a distance of approximately 30 km from Argostoli.

It is a beautiful beach with an intense variety of soil, with thin sand, surrounded by vertical cliffs. One can also find a place with stones and pebbles there, so as to choose what they prefer.

The view above Myrtos is magical, known for the contrast of the white pebbles of the beach with the shades that the water takes due to sea currents and the dark green color of the area. Perhaps this is the reason why this beach is so famous and has been described as “fascinating” and “like a little piece of heaven” by many. It is located beneath the steep cliff, several meters below street level.

Visitors who want to approach the beach should go down the slope for several kilometers, on a road which has fortunately been opened and paved recently.

The beach of Myrtos is quite long, as more than 20 minutes are required for someone to walk from one side to the other.

Its waters are green. The sea is not clear because of a sediment that is carried with currents and it deepens abruptly while many streams may drag the swimmer. There have been many cases of such incidents and therefore, special attention is required. The lifeguard, who has been hired during the recent years, is responsible to determine when the sea is dangerous for swimming and also to intervene in difficult situations.

Each year, the beach acquires the Blue Flag, since it is fully organized and also has a parking lot.

One thing that stands out in Myrtos is the cave at one edge of the beach. All its features create a magical landscape and each year, during August, a concert with famous artists is held, which is attended by thousands of spectators.