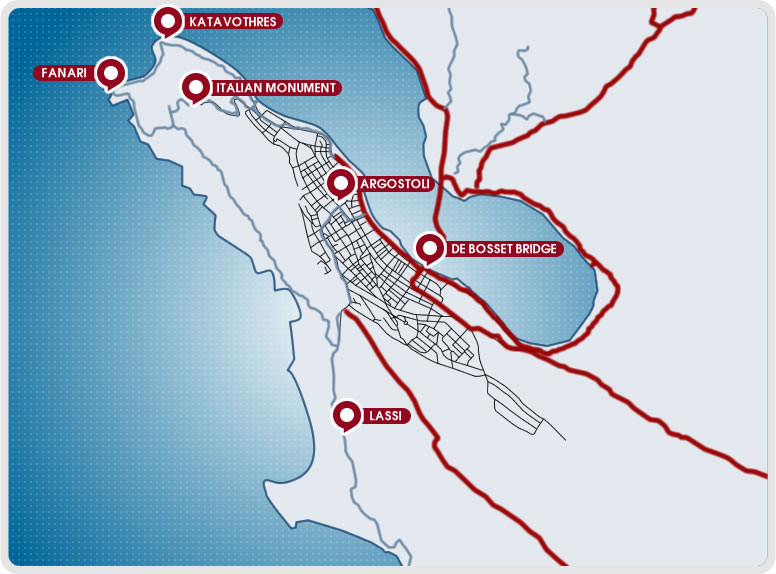 The route of approximately one hour’s duration starts from Katavothres (the sinks) where seawater enters cracks near the shore and disappears following an underground route across the whole island. Then moving towards the Lighthouse of Saint Theodore where two centuries ago, helped ships approaching the shore, to avoid the rocks.

Your tour continues at the monument of the Italians over the pine-tree covered “round of Lassi”. On top of the hill - a monument of modern history of Kefalonia - was created in honor of the thousands of Italians who have fallen under the fire of the Germans refusing to hand over their weapons to them.

The route continues in the popular area of Lassi, which stands out for its natural beauty, nightlife and tourist infrastructure that meet every requirement - at that area the well organized beaches of Makris Gialos and Platis Gialos are located.

Our taxi returns to the city of Argostoli and we visit the Museums, where findings from the island of Kefalonia dating from the Paleolithic Period to the After-Roman Period with artwork, photographic files currencies, local costumes etc, are exhibited.

Our short trip closes by visiting the bridge of Argostoli, known as Devossetou Bridge. Built in 1813 by Charles-Philip De Bosset on an attempt to prevent the entrance to Argostoli through Koutavos lagoun, which those years were synonymous to malaria and even death.